How Crossfit Changed My Ability to Love Myself 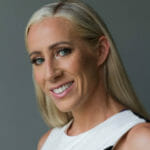 High intensity, functional movement sports programs such as crossfit are becoming increasingly popular among female athletes. With the increase popularity of crossfit it has become more acceptable for women to develop a mind and body of strength rather then pursuing an unrealistic body image that encourages what you do not already possess. The focus for a large number of women has been the number on the scale and their athletic performance has been driven by the image appearing back to them in the mirror. Many women have focused on cardio in order to avoid appearing “too manly” or feeling unaccepted within a male driven sport such as weight lifting. It is encouraging to see how people’s perceptions are changing and how women are being encouraged to pursue a mind and body of strength, not one of weakness and frailness. Below I share how becoming a part of the crossfit community has impacted my life.

Changed my focus from wanting to be “skinny” to becoming “strong”.

Before I found crossfit my focus was on doing tons of cardio combined with light weight lifting with the overall goal of getting as “skinny” as possible. My focus was never truly about performance asit was always attached to chasing a feeling of becoming invisible and appearing as lean as possible. The first time I entered a crossfit box the things that stood out to me the most were that there was not a single mirror to be seen and everyone appeared to be focused on what they were doing not discussing what they looked like. From that day I found my home, a place where I have learned to respect my body by pushing its physical limits in a healthy manner with the overall goal of achieving optimal athletic performance in a supportive, community. I no longer focus on what I look like as over the years of training in this environment I have found self acceptance and love.

Changed my focus from what I cannot do, to what I am capable of doing.

In the past my main focus has been placed on what I was not good at instead of appreciating what I was capable of as I moved towards making improvements in my athletic performance. With the focus being on the negative I often underestimated my capabilities in athletic performance and was not achieving what I was capable of. Being around other crossfit athletes and within the crossfit community I have learned how to shift my focus on what my body is capable of doing in the present moment and how to build on my mental and physical strength to progress further. By focusing on what I am capable of doing my mindset has shifted to possess a positive self concept and self talk therefore, creating opportunities for enhancing my overall athletic performance. Adapting the mindset “I am capable” creates unlimited possibilities that I have put into practice in all life areas.

Created unlimited possibilities. “There is nothing I cannot do when I put my mind to it”.

Before I found crossfit I was focused on having everything perfect or feeling “good enough” before starting something. Having this mindset placed limits on the things I did and the enjoyment I received from doing them. With the support found in the crossfit environment I was able to challenge myself in things I never would have as well as, things I was not prepared for 100%. By adapting a new mindset I have opened my life up to endless possibilities, as I no longer allow fear to get in the way.

Changed my perspective on my true desire to engage in physical exercise.

I have always played on an athletic team since the age of four, as I was the type of kid who didn’t like to sit still for long. Somewhere a long the way my focus became derailed on why I was engaged in physical exercise. It became a means of coping with stress and emotional pain in an unhealthy manner. When I started crossfit the sense of belonging and family around me was so strong I found myself quickly getting back to the reasons I enjoyed physical exercise when I was a little girl. It became about the people around me, having fun and challenging myself to be better overall. Through the support of the people around me I found myself competing in my first crossfit competition when my daughter was only four months old. Having not trained the entire time while I was pregnant, and only recently engaging in crossfit four weeks prior to the competition I never would have participated in such an event without the support and encouragement that I felt within the crossfit family. It is with these types of mental shifts that I have become more courageous in stepping outside of my comfort zone and pursuing challenges that I never would have considered with my old mindset.

For many years I learned how to push through discomfort and pain by shutting down my self talk and becoming numb to the physical sensations in my body. It served a purpose at the time as I could push through a half marathon on minimal food and hydration by using pure determination, having little respect for the impact on my body and overall health. Shutting my mind off, ignoring the physical sensations in my body while running kilometer after kilometer as the music blared in my ears, became my therapy as it was only during this time that my mind truly shut down and I began to escape. In doing this I found myself becoming more susceptible to injuries, symptoms of burnout, and a feeling of unhappiness if I was unable to run. Running became a means of running away from my reality. When I began crossfit I learned very quickly that I needed to become more aware of how my body was feeling in the moment in order to push through and conquer the “workout of the day” (WOD). I learned how to have fun in a social environment where other athletes encouraged you no matter how you were performing. I learned how to challenge my self in a healthy manner where I push harder in order to move a little faster or lift a little heavier not with the focus of losing weight or achieving a specific appearance. Most of all I have come to understand the difference between working through discomfort and pain, as well as pushing my body to receive optimal performance vs. pushing my body into burnout. In learning these key differences I have been able to enjoy the benefits of healthy physical exercise as a way of challenging my competitive drive, and treating my mind and body with the respect it deserves.

Became comfortable with failure and success.

Olympic weight lifting has taught me to become comfortable with failure. As my perception of failure has changed from thoughts of “you are not good enough” to “you have pushed your body to maximum capacity in this moment, you are strong”. Lifting has taught me to learn how to challenge my self without crushing my self worth. I have watched my strength gradually increase after recently having a baby, embracing the positive changes and new physical and mental strength I have found. Being in a supportive environment that crossfit promotes, I have learned how to reward myself and celebrate personal success. Most importantly I have watched myself “fail” at a lift or not complete a WOD (workout of the day) to only destroy that same WOD a month later or to reach a new PR on the same lift I had tried a week earlier. Therefore, success does not come without failure as failure becomes real when we stop trying. With self acceptance and love I have learned how to embrace the feelings of success and to allow myself to enjoy the benefits of personal achievements. I have carried my comfort with failure and success to all areas of my life as I have learned how to visualize my goals and to take the steps towards reaching them. I have learned how to stay on track when life throws me curve balls, for giving up is not an option, as I will continue to conquer my fears and achieve my dreams.

In all, I have taken the benefits of training within the crossfit community and adapted them to all areas of my life. I have conquered my insecurities, no longer being preoccupied with how my body looks, by developing a mind and body full of strength, learning how to go after what I want and need in my life. With this I have become a positive role model for my young children and a loving partner to my husband. It is within adapting the values that crossfit promotes that my life has changed.